Don't miss Mapscapes & Historic Origins, an exhibition in The Gallery at Plymouth Public Library which will be on display from March 5 to May 31, 2018. This show features the work of Sean Cassidy, whose specialty is oil painting.  Photos from the opening reception on March 16th are now available to view in the Library Flickr account. Sean Cassidy is a graduate of the School of Visual Arts in New York City, where he received a Bachelor of Fine Arts degree. He later received his Masters in Fine Arts degree in painting from Central Michigan University. While living in Michigan, he taught as an adjunct professor at Central Michigan University and at Mid-Michigan Community College. In 2007, he moved to Plymouth.  He currently teaches at Bridgewater State University, Quincy College, Cape Cod Art Association, and also at his own art studio.

Sean's paintings are primarily done in oil. He has a series of figurative works using aerial maps and layers of thin glazes to create an ethereal quality that metaphorically explores the nature of the human psyche.  His work has won various awards and has been exhibited in both national and international juried exhibitions. He is a juried member of the Copley of Society of Art in Boston. For more information, visit http://seanjcassidy.com/. 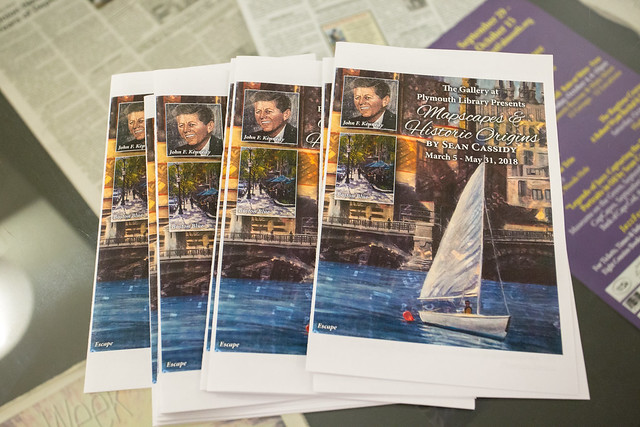 Posted in The Gallery.